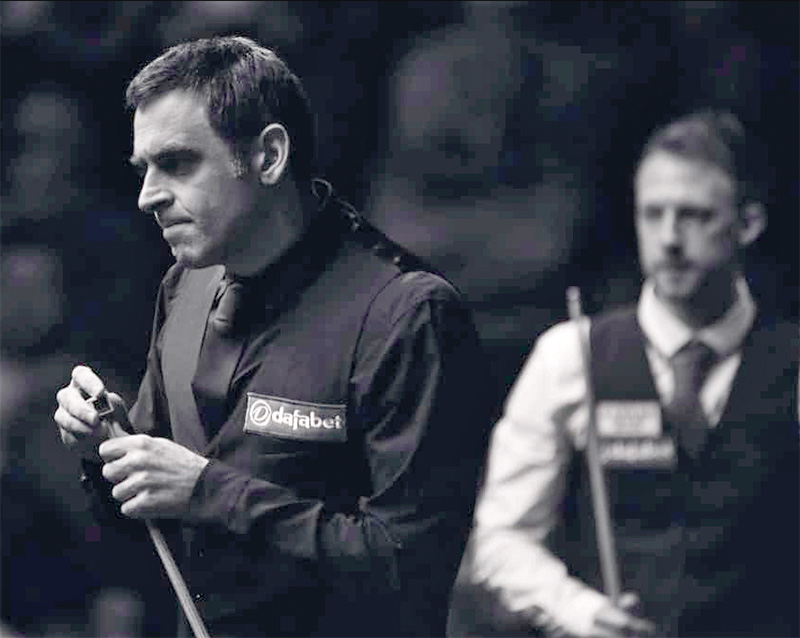 ["Open Mike" is the anything-goes, often off-topic Editorial page of TOP. It's supposed to appear on Wednesdays, but this has been an atypical week for me. That's my excuse. —Mike the Ed.]

Ronnie O'Sullivan, from his Facebook page. With eventual
champion Judd Trump back in the bokeh.

Just briefly—I know a lot of people don't care for cue sports, but I'm a lifelong pool buff and, lately, utterly besotted with the quirky put perfect English game of snooker. Snooker currently has a larger-than-life star whose brilliance, and the beauty of whose play, is vaulting the game to unforeseen heights. His name is Ronnie O'Sullivan. His closest rival in the history of the sport describes him as a "genius." He is aging, but his star is burning more brightly than ever. He is to his sport* what Pelé, Michael Jordan, Tiger Woods, Aryton Senna and Serena Williams are, or were, to theirs.

Currently we're halfway through the Players Championship being played in Preston, Lancashire, England—and O'Sullivan is getting very close to an epic landmark, both for him personally and for snooker. His record of "centuries"—runs of 100 or more points in one turn at the table—stands at 997. (He made two more yesterday.) Three more and he will reach the fabled 1,000 mark, which through most of the game's history has been thought impossible.

To score in snooker you must pocket a red ball first, which earns you one point and the right to pocket a colored ball. Those score between two and seven points depending on the color and their position on the table. Red balls stay down, but colored balls are re-spotted until the end of the game. Here's a brief video that explains the rules and basic strategy of snooker.

A "perfect game" in snooker is a 147. O'Sullivan leads history in 147s in match play with 15. The player in second place, the great Scotsman Stephen Hendry, who was once considered unsurpassable as the greatest player in history, is second with 11. To win a frame (which happens when one player gets comfortably more points than are left on the table, usually around 65–75 points) and then continues playing such that he scores 100 points in one turn at the table—that's a century. They used to be quite rare, but in this era of full-time touring professionals they're getting more common. Stephen Hendry had 775 centuries when he retired at age 43 in 2012, still the second-highest total ever. Australian Neil Robertson is the only player ever to make 100 centuries in one year—he made 103 in the 2013–14 season.

O'Sullivan ended the 2017–18 season with 948, and talk was rife that he would inevitably break 1,000. He's on the doorstep now. To see any of the recent ones, about all you have to do is Google "Ronnie O'Sullivan 9xx." A video of Ronnie scoring that particular century will pop up. I've watched a number of them twice.

Can anyone ever break such a record? It's certainly possible—Ronnie has taken breaks from competition in his career, and currently plays in only a selected few tournaments every year. Someone nearly as good as he is with an appetite for play more like Stuart Bingham's could conceivably surpass him. Someday.

Ronnie got me into snooker, but I doubt he'll get me out of it (attendance at NBA games actually dropped after Jordan retired). It's a magical game, as exact and as perfectly in balance as baseball, and great fun to watch. No frame is ever quite the same. It's just a special thing to be a snooker fan at this moment in time, the autumn of O'Sullivan's scintillating, mercurial career, during which all the records he will end up setting will be set. Those of us who play cue sports know how insanely hard it is to do what he does—to watch him in full flow is to be amazed. Even standout stars like Stephen Hendry and Steve Davis admit there's never been anyone quite like him.

Other sports fans more often remember big moments in team sports. Fair enough. But for me, the day Ronnie hits a thousand will be a day to never forget.

*People who think cue sports are not "sport" are all wet—snooker requires two-thirds the intellectual power of chess, half as much concentration as driving racing cars, nearly as much physical skill as golf, and as much constant practice and fortitude under pressure as any sport you can name. It demands hand-eye coordination, steadiness, great touch, and sometimes an almost ungodly precision. All that's missing is the brute physical effort component that some Americans wrongly believe to be a component of the definition of the word. If archery, the shot-put, high-diving, weightlifting, and bowling are sports, then snooker surely is.

Original contents copyright 2019 by Michael C. Johnston and/or the bylined author. All Rights Reserved. Links in this post may be to our affiliates; sales through affiliate links may benefit this site.

(To see all the comments, click on the "Comments" link below.)
Featured Comments from:

Rodolofo Canet: "O'Sullivan not only takes breaks and plays only selected tournaments. He's been able to fail on purpose a very easy maximum break of 147 complaining they're paid too low in tournaments! Please remind that only 147 147s have been scored in the history of the sport. He was expected to refuse scoring more centuries in the current tournament just to synchronize his thousand with the World Championship. He used to play very, very fast, and because of that is nicknamed "the Rocket." He can play with both hands. In fact, at the beginning of his career, a rival complained of his changing hands for a difficult shot, claiming disrespect. He replied that he could play better with his left than his rival could with his natural hand. The complaint reached the high organizers of snooker and he was made to demonstrate his skills to avoid a penalty. He's the closest thing to a true genius you can find in today's sport. And I used to be a loyal Hendry fan!"

Greg Heins: "O'Sullivan was born in Ilford, so doesn't that make this a photo story?"

Mike replies: Yes! Yes, it does!